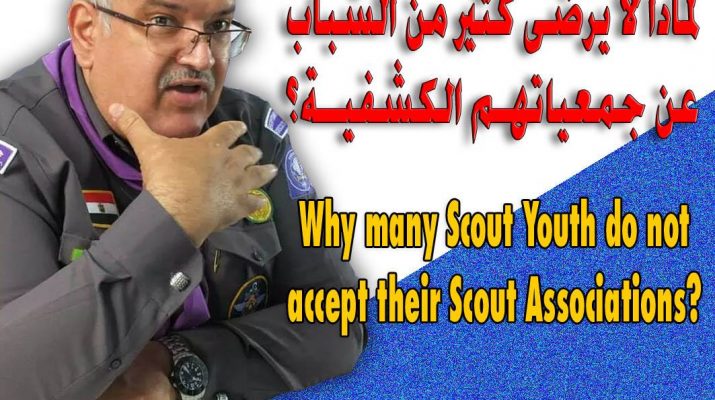 The words of my professor in philosophy – we are students at the university – Prof. Dr. Hassan Hanafi hesitate in my ear and he says: If you want to criticize philosophy, you have to philosophize, and this statement repeated with me and in front of me in multiple positions, but in the Scout, if met a number of Scout leaders You can expect to speak in non-scouts, and often their conversation is full of criticism for detection, if you want to get out of the robe of scout; you can only sink by talking about it !!.

Sciatica circulates in its orbit dozens, hundreds and thousands, and whenever one of our friends in the scout, whether in the Arab lands, or other regions in Europe, Asia, Africa, America, and others, but brings us the scout talk, and is very busy and often criticized by many The most common phenomenon is that most of those who speak to them in this regard have a real oppressor towards their scout societies or those who are in charge of them, so that they criticize them and rely on their goals. Their criticism is offensive in some Sometimes, I touch others with a direct accusation. I have tried to make some observations that some people present here or there:

Some speak of the attempts of many of the names of the scouts to profit from it in one form or another. Others talk about the depletion of the resources of associations and scout organizations in travel operations, which is a form of scouting tourism without any purpose or goal or product. Some talk about blocking the glorious leaderships And some of them are talking about the unwarranted disbursement by some associations for purposes that do not represent a real priority for achieving scouting goals and ignoring the real activities that require this support. Drain the resources of associations in ceremonial forms of intimidation, such as excessive work in the armor and the like and give it to every passerby until it lost its value, and talk about some of the leadership of some leaders in the departments of associations with the money of allowances and cash compensation and tickets, while forcing the Scout Scouts interested in paying their fees Their travel expenses in foreign missions in which they represent their countries, and some talk about the establishment of some activities on paper only; without any balance of reality, in what can only be described as looting, and some talk about the establishment of activities that do not meet the objectives And some of them talk about obstacles faced by religious or ethnic minorities and the difficulties encountered in registration or exclusion of participants, and some talk about the control of the scouts on certain associations and the lack of opportunities for young generations, forcing them to establish associations outside the framework of detection And some of them spoke of the decline of scout values without a real confrontation by officials in some associations, such as the promotion of homosexual activities. Some of them reported that the programs implemented by the associations do not meet their needs. Why scout societies are the right of young people or the right of adults?

The natural solution is to hold dialogue tables in each association with youth and young leaders, to listen to them and to criticize them, their needs and observations, and to take them seriously, even if it is necessary to change the structure of the associations And their strategic vision, and provide more opportunities for the empowerment of young people, and their integration into the work committees of associations and give them full confidence to try and error and learn from experience, first and last Scout for young people and youth, and this is what we say about the Scout Movement.

…In conclusion, if we wonder why many Scout Youth do not accept their scout associations? Ask Scout Youth